Tesla firmware 8.0 has been out for a few days now and, if you’re still waiting, at least the release notes and a lot of pictures are available for you to look at.

Having used the new media player for a few days, I wanted to share my initial impressions of it.

The short of it is that I’m really looking forward to 8.1 where I hope they will fix some of the glaring issues, but let’s take a quick look at the major changes in this area.

Tesla does a good job of highlighting improvements in the media player in their release notes and those are indeed strong areas.

My favorite feature so far is the ability to look for your next song, collection, etc. while still playing and seeing your current song. This works in two ways. The first is that there is now a bar of favorites or recent music below the information for the currently playing song/selection: 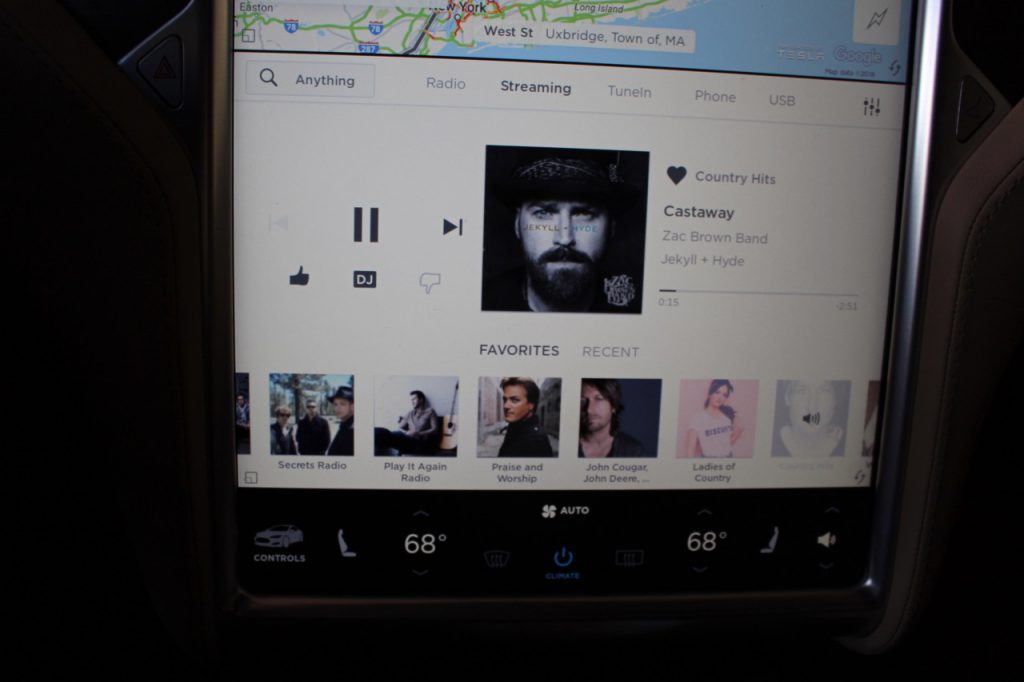 You can swipe left or right on the lower bar and pick the next item to play without swapping screens or hiding the current one. The interface is clean and quick.

The other option is to minimize the currently playing song to a smaller area to get a larger list of new options to choose from. You do this by swiping down on the current song area and the effect is responsive and natural: 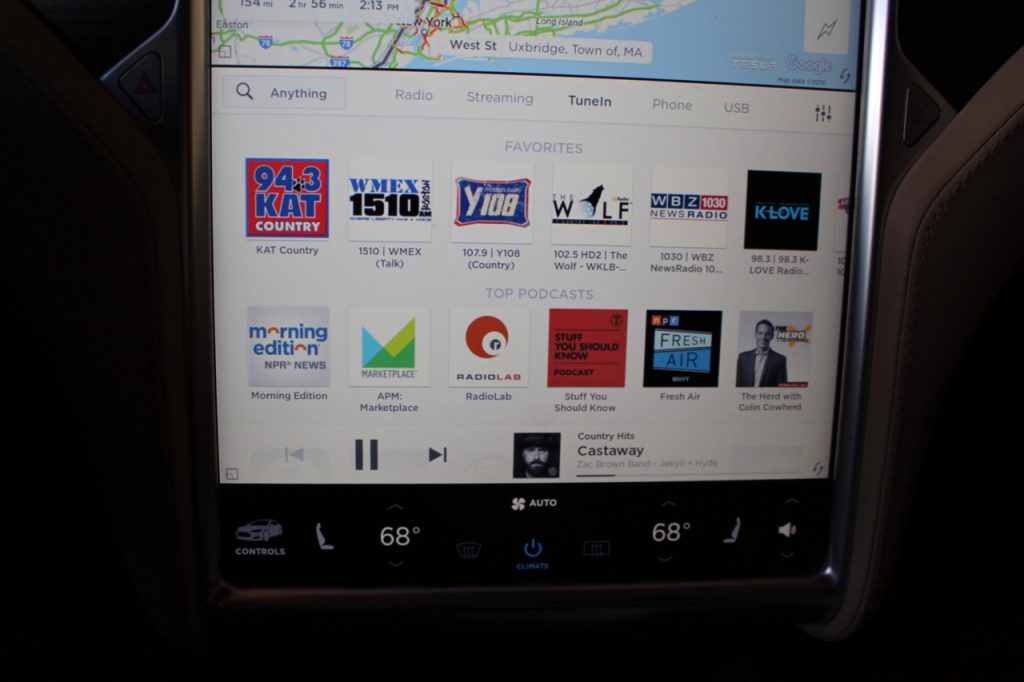 Along with this quick selection effect, you can also pick from the major categories at the top to pick from Radio, Streaming, Tune In, etc to choose what types of media choices you want to show.

What Tesla calls the “Browse View” is a comprehensive approach to looking for new music matching your search criteria in all categories or in a single selected category. The search results are organized by saved favorites, top stations, etc. 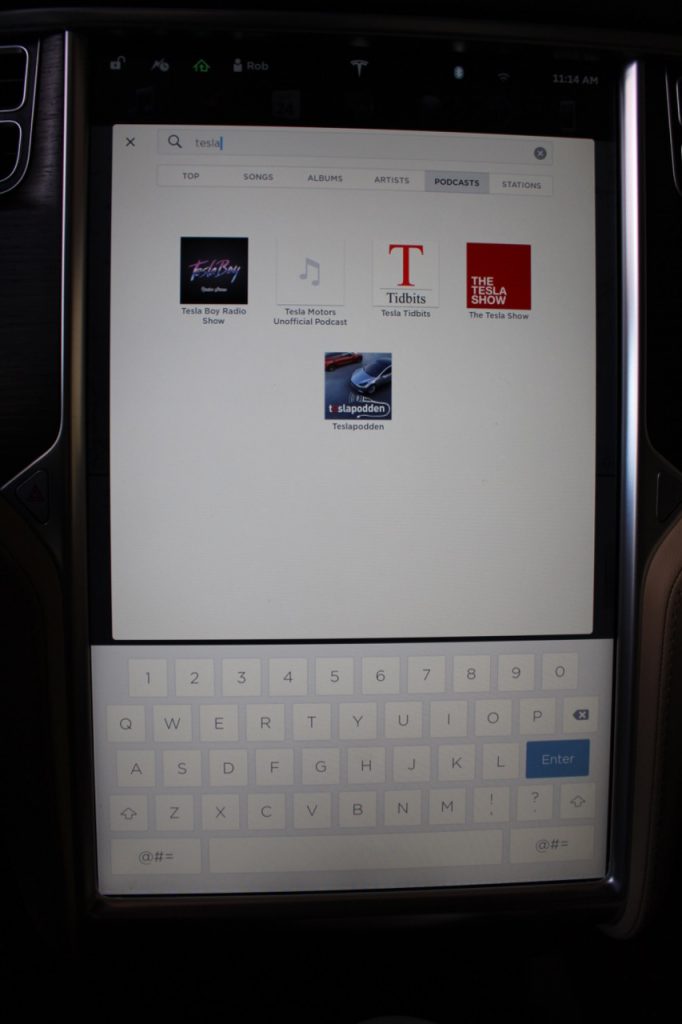 In addition to making the search function much more accessible, Tesla has really allowed all the different content options to shine.

Note that Tesla will still not search anything on your USB devices.

What I really like about this feature is how Tesla organizes the information into favorites, top stations, etc. This makes finding the kind of content you’re looking for quick and intuitive.

There are a number of smaller improvements which were also nice to see. For example, the adjustment for fade and balance is now one popup instead of the awkward tabbed popup from before.

The new organization for Podcasts is a great improvement, although I find Podcasts to be available on my phone long before they turn up on TuneIn so I tend not to use TuneIn for Podcasts.

There really are dozens of small improvements in the media player that improve the media selection and playing experience. Little things like the thumbs up/down versus the old way are welcome changes.

Being able to pick my next selection while still seeing and playing my current song is a nice option when I need to find something new, but I find the extra content on the screen all the time to be distracting. I usually pick a playlist and just run with it until I get tired of it and I don’t need to see those choices all the time.

It would be nice to have an option to only show the currently playing song, hiding or minimizing the quick selections until I ask for them with a quick tap on the screen or something.

In addition to cluttering the interface, the options displayed are poorly organized. It looks like someone sorted them in the order the media types appear in the menu.

With this approach you get your AM/FM favorites first, then your streaming media favorites etc. While I have AM/FM favorites I rarely listen to them as coverage is poor where I live. So why should I always be presented a list of AM/FM favorites while my songs are playing? I’m never going to choose them. 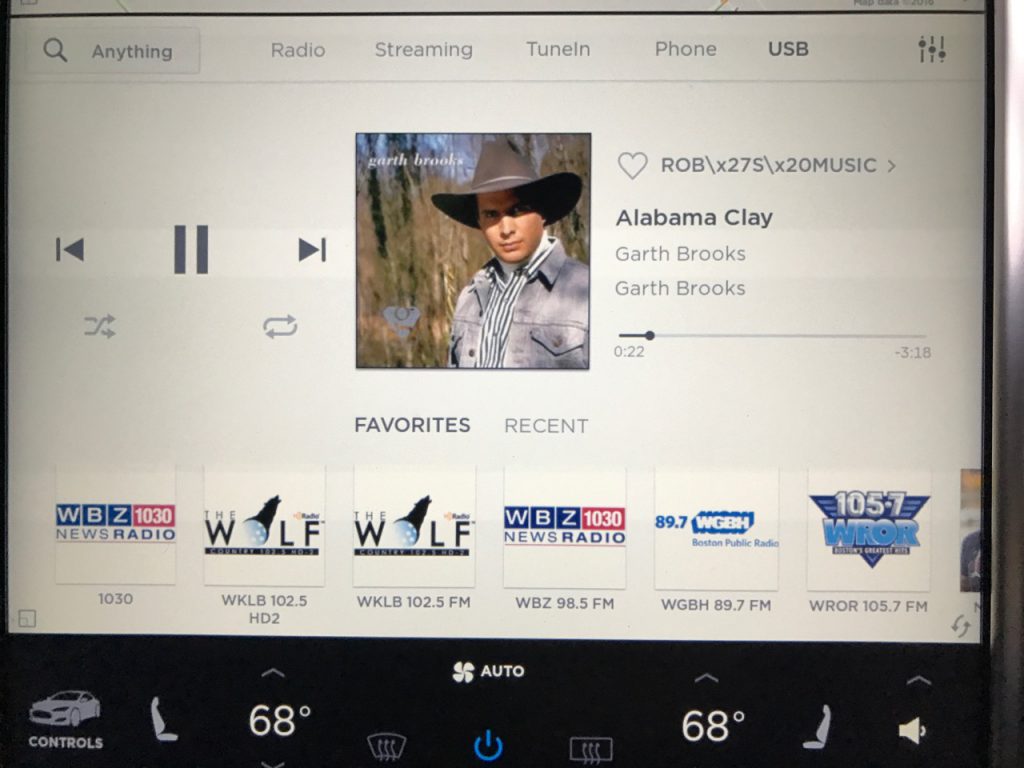 Tesla’s release notes speak about putting your favorite stations front and center, but they’re clearly missing that mark for me.

On every major software release from Tesla, I get the impression that the software is tested on the bench by software engineers without any practical real-world use and that the owners who are in the super-secret beta testing group don’t provide adequate feedback or test enough things for them.

For a major media player update for over 100,000 cars with hefty price tags, I would not expect to find some obvious and glaring bugs in my first few hours of use. Unlike some of the other things Tesla is doing like the tricky Auto Pilot changes, this is not rocket science.

My #1 complaint on the entire 8.0 release is the way streaming media songs skip at the end of the song after you return to your car. It seems to happen 100% of the time and the song ends about 30s-20s short of the actual end of the song.

So you get back in the car, the song resumes (a wonderful feature they’ve had for a long time), plays for a bit then ends abruptly. That’s super-annoying and everyone who rides with you will notice and comment on it.

Tesla had a similar problem like this in the past and fixed it many revisions ago. How this made it through their testing is a mystery and a disappointment.

The USB player has ever been a challenge for Tesla. While I’m not in the group of people looking for advanced support of FLAC etc, I do expect that basic things like a USB drive name with spaces in it to render normally, but it doesn’t: 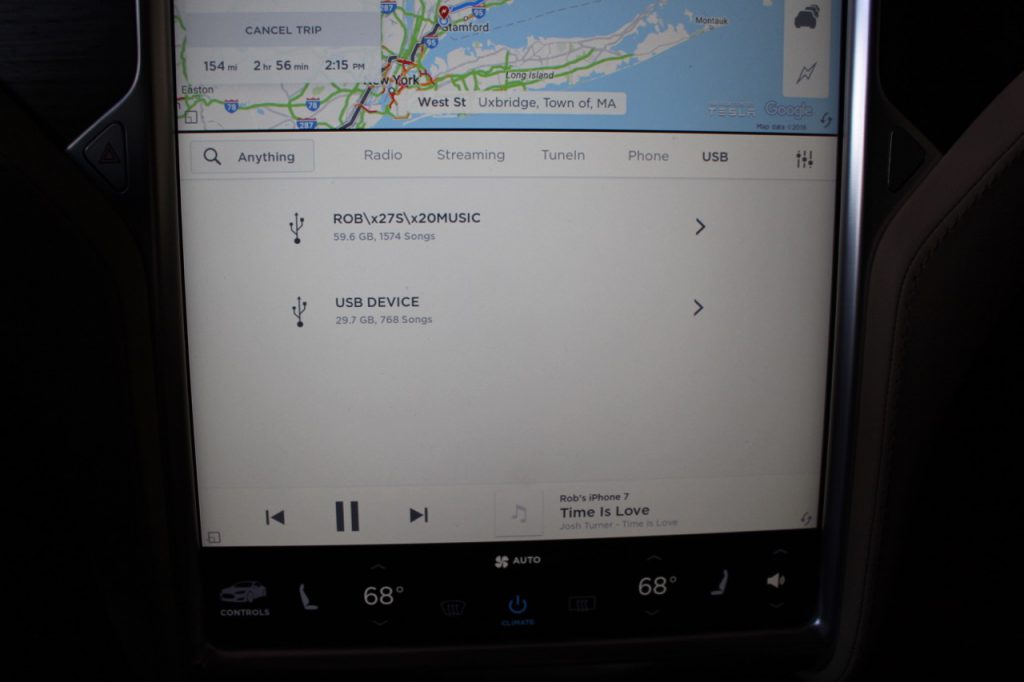 Here again, we’re back to some really basic testing and something like this shouldn’t have made it through their testing. You’re also still unable to favorite songs, playlists, folders or anything on the USB drive. You can still navigate to a folder and shuffle and the ability to pick individual songs is even easier than before but the updates in this area were minimal and buggy.

Overall, I like the direction Tesla is heading with the new 8.0 media player. They’ve modernized the interface, added some missing elements and provided new and intuitive ways to access all the various types of media.

I also suspect a lot of this work was needed to make the new layout in the upcoming Model 3 work well and the new format looks like it will lend itself well to a horizontal orientation as they’ve previewed for the Model 3.

The new media player is still buggy and needs to be refined by time and use. Fortunately, Tesla has been faithful in continual updates for all of its Model S and Model X vehicles and even “classic” Model S owners like myself are benefitting from the enhancements over time. I trust that Tesla will “soon” fix the bugs I’ve encountered in 8.0 and will continue to improve the experience.

Next, we’ll look at the changes to the Navigation system which are much more consistently positive.

This site uses Akismet to reduce spam. Learn how your comment data is processed.